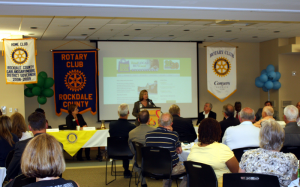 On May 2, 2012 the Shop the Rock program was officially launched. The kick off event was held at the Rockdale Medical Center, which sponsored the event. The kick off was held as part of a joint meeting of Rotary Club of Rockdale County and Rotary Club of Conyers. In addition to the members of the two Rotary clubs, attendees at the event included City of Conyers Mayor Randy Mills, Rockdale County Board of Commissioners Chairman/CEO Richard Oden and Conyers-Rockdale Chamber of Commerce Board of Governors Chairman Lorraine Harrison.

After the invocation and the pledge of allegiance the Rotary clubs conducted their business and then turned the program over to Lorraine Harrison who facilitated the event. A short video was shown that introduced the program and featured appearances by Mayor Randy Mills, Chairman Richard Oden, Chairman Lorraine Harrison, Glenn Sears, Executive Director of the Conyers Rockdale Economic Development Council, Diane Adoma and Deborah Armstrong. The video will be posted online on the Shop The Rock program website.

After the video Mayor Mills, Chairman Oden, Diane Adoma, Wales Barksdale, Deborah Armstrong and Keith McGibony spoke to the group about what they expected from the program and how the program would positively impact overall economic development and quality of life in Rockdale County and Conyers. Lorraine Harrison also explained how the new program would be advertised and promoted locally by our local news media, electronic billboards on I-20, and a contest encouraging people to spend $20 on the 20th of each month with local merchants. The online contest will use Facebook and Twitter to promote the program and help spread the word.

Merchants will be given the opportunity to sponsor the program and receive recognition on the program website, www.ShopTheRock.org, as well as signage for their businesses to show that they are participating in the program.

The kick off event was heavily supported by local businesses who provided in-kind products and services to launch the program. We would like to recognize these businesses.